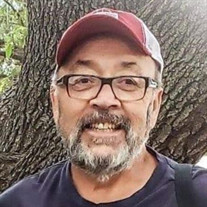 Alex “Big Al” Michael Macias, 67, went home to be with his Lord and Savior Wednesday, February 23, 2022 at his home in Crowley with his wife, Ellen by his side after a long battle with cancer. Big Al was born June 13, 1954 in Fort Worth to Leroy Macias and Peggy Macias Morton. He grew up in Sansom Park and graduated from Castleberry High School in River Oaks, where he was a class favorite and captain of the football team, in 1972. A visitation will be held from 5:00pm to 7:00pm, Monday, February 28, 2022 at Lucas & Blessing Funeral Home, 518 SW Johnson Ave, in Burleson. Funeral services will be held at 2:00pm, Tuesday, March 1, 2022 at Lucas & Blessing Funeral Home with burial to follow at Tye Cemetery. A livestreaming of the service can been seen at https://video.ibm.com/channel/2muQ8JfMPkJ At the age of 14, while attending high school, Big Al went to work for the Star Telegram and retired after 32-years of service. After his retirement, he began doing lawncare alongside his good friend, Mike Rodriguez. Big Al took a job Russel Feed Store and continued to mow lawns for himself on the side. Ever the hardworking partner and provider, Big Al worked until he was diagnosed with cancer. Big Al was a member of the Grace Temple Church on Riverside Dr. He became both teacher and student while serving as a Sunday School teacher, he truly believed that it was those precious 5- year-old children that helped him learn the Bible. In February of 1986, at a Valentine's Day event through Grace Temple, Big Al received another of his greatest blessings in the form of the beautiful Ellen Dake. Big Al and Ellen went on to marry only a few short months later at Grace Temple on June 28, 1986. This is where Big Al, with his 5-year-old daughter, Regina and Ellen with her 7-year-old son, Joshua blended their little families and began their 35-year marriage. In 1987, he became the assistant soccer coach with Crowley ISD, starting his coaching with his daughter, Regina's soccer team The Dolls. He went on to become the head coach, ending his youth coaching adventure with The Stars, only to begin anew! Both playing for and managing adult co-ed soccer, taking many of his teams to numerous championships, not only as a coach, but also as their role model, mentor and friend; he was dearly loved, respected and truly missed. Big Al was known for his kindness and generosity. He was quick to lend a helping hand or hot meal whenever one was needed. He loved camping and being surrounded by his family and friends, indulging in every opportunity to show that love and generosity to everyone through his famous BBQ. He was preceded death by his parents, Leroy Macias and Peggy Macias Morton; brother, Jim Macias; brother-in-law, Richard Erickson; nephew, Kevin Smith; granddaughters, Christina Austin and Elizabeth Macias Big Al is survived by his wife, Ellen Dake Macias of Crowley, TX; daughter, Regina Hollander and husband, Tommy of Cisco, TX; son, Joshua Dake and wife, Sabrina of Idaho Falls, ID; sisters, Colleen Erickson of Weatherford, TX and Barbara Tejada and husband, Robert of Lake Worth, TX; brother, Mark Macias and wife, Whendy of Haltom City, TX; grandchildren, Diana Hollander, Justyce, Johnni, Alex, Evie, and Gabriel Dake, Nancy Martin-Dake, Linda Bright and Tiffany Macias; and numerous nieces, nephews and friends.

Send flowers to the Macias family.