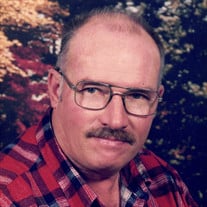 Billy Ray Arnold, 81, of Burleson, passed away Friday, April 9, 2021. A visitation will be held from 6:00pm until 8:00pm, Monday, April 12, 2021 at Lucas & Blessing Funeral Home. Funeral services will be held at 1:00pm on Tuesday, April 13, 2021 at Lucas & Blessing Funeral Home. Burial will follow at Valley Mills Cemetery in Valley Mills, Texas. Billy was born September 2, 1939 at the family home in Oak Grove, a small farming community near Burleson. He graduated from Burleson High School in 1957 and attended University of North Texas. After graduating in 1961, he returned home to continue in the family business of farming. Billy lived his life farming the open fields in and around Burleson, he often said in the field was where he felt closest to God. Later in his life, he enjoyed telling his grandchildren stories of land he farmed that was now covered in new homes. Those stories along with favorite PaPaw sayings such as “Close the door” if he felt you were standing with the refrigerator door open too long and “What the Sam Hill?” heard by all during grandchildren’s sporting events, will live long into the future. His life long loves where Jesus, farming, and family. He will be greatly missed. He was preceded in death by his parents, William Warren and Kathryne Holdridge Arnold. Billy is survived by his wife, Nelta Arnold; children, Phyllis Marti and husband Paul, Jr., Teresa Williams and husband, Troy, and Kevin Berry and wife, Julie; sister, Betty Jean Kirkland; eight grandchildren; 10 great-grandchildren; and nieces, Tara, Ramona, and Carrie.

The family of Billy Ray Arnold created this Life Tributes page to make it easy to share your memories.

Send flowers to the Arnold family.