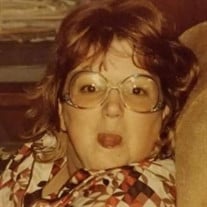 Bobbie Jeanne Alfree-White, 71, passed away April 30, 2020 at Alvarado Meadows Rehab and Nursing home in Alvarado, Texas. She was born October 17, 1948 in Dallas, Texas to Bobby Gene and Virginia Ethel (Ryan) Walker. Bobbie grew up in Grand Prairie, Texas. At an early age, she was hit with bone cancer and underwent several surgeries. She made many friends through many years and struggles. She graduated from Grand Prairie High School in Grand Prairie,Texas in 1966. After high school, she joined the Army in October 1966 and served for almost a year. She served during the Vietnam war and was the recipient of the National Defense Service Medal. She was honorably discharged in 1967, achieving the rank of E-2. Bobbie loved hosting family and friends at her home in GP. She loved shopping at high end stores and resale shops. She loved staging her home with antique furniture, pictures of her kids, friends and family from now and the past. She loved being in groups of her favorite people while loving life. She loved growing her own rose bushes at her GP house and always had a greener than green thumb. Bobbie married Allan Lee Baxter in 1967 in San Antonio,Texas. They were happily married for 5 years. During this marriage, they had 2 children, Troy Lee Baxter, 1968, and Shannan Dee Baxter, 1971. They separated in 1972 and divorced. Bobbie married Donald Franklin Kemp in 1975 in Dallas,Texas. During this marriage, they had 1 child, Brandi Annette, 1976. They separated in 1976 and divorced. Bobbie married Larry Dwayne Leistikow in 1979 in Dallas,Texas. During their marriage, Larry adopted Brandi Annette Leistikow. They were happily married for 18 years. They separated in 1996 and divorced in 1997. Bobbie married Marvin Lee White in 2003 in Wichita Falls,Texas. They were happily married for 15 years. Bobbie learned sheet metal work and also worked for A.R.A. in Grand Prairie, Texas. She ran a catering truck for several years where she was one of the only women working in a male dominant setting. In 1987, she attended nursing school and got her M.A., while working her internship concurrently at Arlington Family Practice as a medical assistant where she then worked for 13 years. After the death of her mother, she moved to the Lone Wolf, Oklahoma area and retired. In 2008, she moved to New Fairview, Texas with her husband. Bobbie was preceded in death by her parents, Bobby Walker, 1992, and Virginia Reynolds, 1999; her brother, Herschel Odell Walker, 2009; and her great-grandchildren, Junie and Elodee Leath. Bobbie is survived by her son, Troy of Fort Worth; daughters, Shannan and spouse, Chris Sutter of Burleson, Texas, and Brandi of Galveston,Texas; her grandchildren, Chelsey and spouse, Scott Leath, Zachary Shields and his fiance, Courtney, Christopher Walker, Nicholas Walker, and Baylee Shields; her great-grandchildren, Aurora and Dax Leath; her niece, Brittany Walker; her nephew, Tyson Walker; and many other relatives. A memorial service will be held at a park in Grand Prairie on her birthday, October 17, 2020 (more info TBD.) Her remains have been cremated per Bobbie’s final request. In lieu of flowers, the family requests memorial donations be made to the Alzheimer's Association, Children’s Cancer Fund, or Homes For Our Troops. Condolences may be left on Shannan Sutter’s online facebook at https://www.facebook.com/shannan.sutter/. The family wishes to extend their gratitude to Alvarado Meadows, Amie Lugtu Tidwell, Alpha Omega Hospice, Qyn Hughes, Veterans Affairs for all your care and persistence in caring for mom during her last 2 years. Special thanks to Lucas and Blessings in Burleson, Texas for making a hard time a little easier. “Enjoy what you got right now, because who knows what's going to happen tomorrow.” Bob Seger "And in the end the love you take is equal to the love you make" The Beatles

The family of Bobbie Jeanne Alfree-White created this Life Tributes page to make it easy to share your memories.

Send flowers to the Alfree-White family.