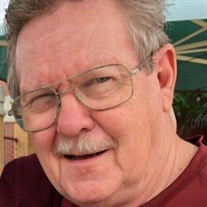 Brian Joseph Wicker, 71, of Burleson passed away on Saturday, February 15, 2020 surrounded by his loving family. Funeral Service: 3:00 p.m. Thursday at Lucas and Blessing Funeral Home. Visitation: 6-8 p.m. Wednesday at Lucas and Blessing Funeral Home. Brian was born October 12, 1948 in San Antonio to Frank and Emily Wicker. He faithfully served his country in the United States Army. Brian attended Texas A&M University for two years before joining the military and remained a life-long Aggie fan. He served in the Aggie Corp (Squadron 8). Brian worked for Kinro as a mechanical engineer where he retired after many years of dedicated service. He was a laid back man, who was loyal to his friends and family and very dependable. After retirement his main hobby was woodworking, which was self taught. He even took up baking as a hobby, making all kinds of breads and cinnamon rolls. Brian was a loving husband, father, grandfather and brother who will be dearly missed by his family and friends. He was preceded in death by his parents, Frank and Emily and one sister. Survivors: Wife of 35 years, Evelyn Wicker, sons; Brian Wicker, Jr. and wife, Jone, David Dowty and wife, Mary; daughter, April Douglass and husband, Levi; sister, Josie Bailey and husband, Pat; brother, Frank Wicker, Jr.; grandchildren, Hannah, Hunter, Dillon, Owen, Joseph, Matthew, Trevor, Annabelle and numerous cousins, nieces and nephews.

The family of Brian J. Wicker created this Life Tributes page to make it easy to share your memories.

Brian Joseph Wicker, 71, of Burleson passed away on Saturday,...

Send flowers to the Wicker family.