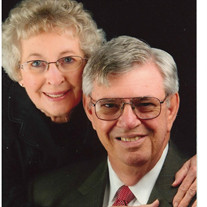 Charles E. (Gene) Reed, 81, passed away Saturday, February 3, 2018. Funeral Services will be held at 11:00 AM Thursday, February 8th at the Lucas and Blessing Funeral Home Chapel, 518 S.W. Johnson Avenue, Burleson, TX. Mr. Robert Moss will officiate. Private burial will follow at the Oak Grove Memorial Gardens Cemetery, Irving, Texas. Visitation will be held on Wednesday February 7th from 3:00 until 5:00 PM at the Funeral Home. Charles was born in St. Jo, Texas January 2, 1937 to Charlie C. and Mabel Smith Reed. He was raised in Henrietta, Texas and attended Henrietta High School. Charles served in the U. S. Airforce, attended the University of Maryland, and received an Associate Degree from Dallas Institute of Mortuary Science. Charles was a Funeral Director for Service Corporation International in Dallas, TX. Seguin, TX. Farming, NM, Apache Junction, AZ, and Arlington, TX. Charles was a member of Highland Church of Christ and very active with the Saints. He served on the City Council of Everman and on the Economic Development Board. Charles enjoyed working at the Ft. Worth Stock Show and Tarrant County early voting. Charles volunteered at Texas Health Huguley Hospital for many years, serving the patients in surgery waiting and served as President of the Auxiliary Board. He enjoyed planning adventurous trips and even cruises. The more people he could get to travel with him the better the trip was. He had a passion for decorating at Christmas. This was one of his favorite joys. Charles was preceded in death by his parents, two wives, three brothers, and one sister. Charles is survived by his wife, Patsy Malone Reed and her son David Malone; daughters, Debbie Reed Carroll (Rusty), Tammy Reed (Randy); grandson, Dusty Lozano(Courtney), great-granddaughter, Parker; several nieces and nephews, friends, and extended family. A big thank you to the Community Hospice angels for their continued dedication to our family during Charles journey. We could not have gotten through this without them. Memorial donations may be made to Community Hospice, 6100 Western Place, Suite 105, Ft. Worth, Texas. 76107

The family of Charles E.( Gene ) Reed created this Life Tributes page to make it easy to share your memories.

Send flowers to the Reed family.