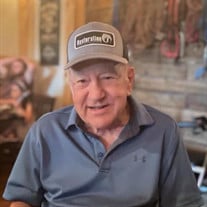 Cleatis Irby Bryant, 91, passed away Saturday, February 19, 2022. Visitation will be held from 1:00pm until 2:00pm, Saturday, February 26, 2022 at Lucas & Blessing Funeral Home, 518 SW Johnson Ave., in Burleson. Funeral services will be at 2:00pm at Lucas & Blessing Funeral Home with burial to follow at Everman Cemetery. Cleatis was born August 26, 1930 in Everman, Texas to Ira Cleatis and Annabelle Pittman Bryant. He grew up in Everman and graduated from Everman High School in 1949. In 1952, he joined the navy and served for 4 years. After the Navy, he began working at Lockheed Martin. It was in the carpool to and from work where he met Vergilene Vaden. They got married on November 27, 1957 at First Baptist Church in Everman, and they were happily married for 64 years. He coached his little league baseball in his younger years. Cleatis loved to work in his woodshop, watch college sports, go eat at Whataburger, but most importantly, spending time grandchildren and great-grandchildren. Cleatis was preceded in death by his parents, Ira and Annabelle Bryant; brother, Richard Bryant; and sister, Annette Lewis. He is survived by his wife, Vergilene Jan Bryant; sons, Rickey Bryant and wife, Jenny and Ronney Bryant and Sally Davidson; grandchildren, Sarah Dolloff and husband, Marshall, Sean Bryant and wife, Merelise, Courtney Standefer and husband, Derek, and Clayton Bryant; great-grandchildren, Sean Bryant, Morgan Dolloff, Mark Dolloff, William Bryant, and Hudson Standefer; and numerous nieces, nephews, and friends. In lieu of flowers, the family requests memorial donations be made to the American Heart Association at www.heart.org.

The family of Cleatis Irby Bryant created this Life Tributes page to make it easy to share your memories.

Send flowers to the Bryant family.