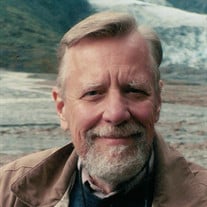 Donald Henry Luecke, 85, passed away peacefully Saturday morning, May 11, 2019 at home in Burleson, TX. He had been a resident of Princeton Junction NJ for 45 years until his move to Texas in August 2018. He coped courageously with Alzheimer's disease for the last 5 years of his life. Don was born on August 5, 1933 in St. Louis, MO to Erwin and Helen (Doswald) Luecke. He spent his early years in Forest Hills Gardens, New York. He graduated from Xavier High School in New York City. He received a BA degree cum laude from the University of Notre Dame in South Bend, IN and an MBA from Harvard Business School. He felt honored to serve in the U.S. Navy as a Hospital Corpsman and remained in the reserves until 1961. After spending the early years of his business career in Product Management and Advertising at major corporations, he decided to take a different path and started his own business, Princeton Security Systems, Inc. In his own business he exemplified his vision and belief: "People before Profits" and managed it until he was in his late 70's. He was a very active member of St. Paul's parish in Princeton, NJ serving as Lector, Eucharistic Minister and Sunday Collection Counter. He coordinated and taught the Bible Study program at St. Paul's for 20 years. he lived his life as a devout Catholic in thought and deed and was a beautiful example for all. Don was a kind and gentle person. He had a quick wit and was quite the punster. He enjoyed collecting stamps, coins, military memorabilia and building ship models. He had an appreciation of ancient Green and Roman classics and learned to read and translate koine Greek, enabling him to read the Books of the New Testament in their original Greek. While his education provided a foundation, his pursuit of knowledge was evident throughout his life as he was never more than arms length from a book or two or three. His love of animals and compassion for all helpless creatures was evident to those who witnessed his careful removal of spiders or once a bat from the house to the outdoors. Don is survived by his loving wife of 58 years, Joan (Meister) Luecke; daughters, Charlotte Luecke, of Lumberton, NJ and Susan Luecke-Schnuck (Perry) of Burleson, TX and 6 grandchildren. He was preceded in death by his parents; brother, Erwin Robert (Bob) Luecke and niece Jean Ann Kaminsky. There will be a funeral mass at St. Ann's Chapel in Burleson, TX on May 24, 2019 at 10:00 a.m. Interment will be at DFW National Cemetery in Dallas, TX at 2:00 p.m. There will be a memorial mass at St. Paul's Church in Princeton, NJ on June 14 at 10:00 a.m. In lieu of flowers, you may make a donation in memory of Don to: Community Hospice of Texas, 6100 Western Place, Suite 105, Fort Worth, TX, 76107 or Senior Care Services, P.O. Box 1517, Princeton, NJ 08542-1517 or Xavier High School, 30 W. 16th St., New York, NY 10011-6302 or St. Paul's Catholic Church, 216 Nassau St., Princeton, NJ 08542.

Donald Henry Luecke, 85, passed away peacefully Saturday morning, May 11, 2019 at home in Burleson, TX. He had been a resident of Princeton Junction NJ for 45 years until his move to Texas in August 2018. He coped courageously with Alzheimer's... View Obituary & Service Information

The family of Donald Henry Luecke created this Life Tributes page to make it easy to share your memories.

Send flowers to the Luecke family.