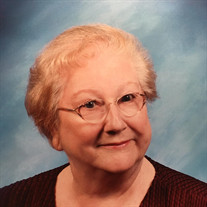 Ethel Margaret Martin Penrod, 82, of Arlington passed away on Friday, September 29, 2017. Catholic Mass at Saint Maria Goretti Catholic Church in Arlington are Pending. Memorials: In Margaret's memory, donations can be made to either Community Hospice of Texas or Saint Maria Goretti Catholic Church. Margaret, a spirited redhead, grew up in east Texas and Abernathy in west Texas. She attended Texas Tech for two years, where she met and married her beloved John Thomas Penrod "Tom", in 1955. They were blessed with a son in 1959, and then a daughter in 1962. The Penrod family moved to the Fort Worth area in 1968, then settled in Arlington in 1972. Margaret worked for the State of Texas as the Purchaser for Region IX, and traveled extensively with her husband as part of his job with ARCO Solar. One of her favorite memories was beachcombing in Puerto Rico with her Tom and picking up seashells. Margaret lost Tom to emphysema in 1996 and then retired; she then converted to Catholicism in 2003, finding great comfort in her home church of Saint Maria Goretti. In 2016, Margaret moved to Greenfield Residences, an independent senior living facility in Arlington. She enjoyed the many friends she made there and loved playing cards, dominoes and chatting the day away. Margaret was an avid crafter, and particularly enjoyed crocheting; many friends and family members will forever treasure her beautiful hand-made creations. She will be best remembered as our Nana, for her sense of humor, her feistiness and her gift of gab. Margaret was preceded in death by her parents; sister, Louise; brother Billy Joe; husband, John Penrod and son, Martin Penrod. Those left to cherish her memory are her daughter, Katherine Penrod Ferrell; son-in-law, Blake; grandsons, Sean, Ryan, Neil; sister, Ruth Freeman of Utah; several other family members and many friends, especially the ones from Greenfield Residences.

Ethel Margaret Martin Penrod, 82, of Arlington passed away on Friday, September 29, 2017. Catholic Mass at Saint Maria Goretti Catholic Church in Arlington are Pending. Memorials: In Margaret's memory, donations can be made to either Community... View Obituary & Service Information

The family of Ethel Margaret Martin Penrod created this Life Tributes page to make it easy to share your memories.

Ethel Margaret Martin Penrod, 82, of Arlington passed away on...

Send flowers to the Penrod family.