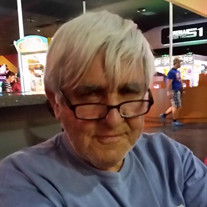 Freddie Gerald Boles, 69, passed away on Friday, October 18th, 2019 at Harris Methodist Hospital in Fort Worth, Texas. He was born on January 21st, 1950 in Winter Haven, Florida to Gordon and Edyce Boles. Fred grew up in Fort Meyers, Florida. He graduated from Fort Meyers High School in 1968. After high school, he started a construction company called Boles Construction as owner/operator where he ran the business for 46 years. Fred married Judith Ann Key in 1968 in Martinsville, Indiana. They were happily married for 50 years. Fred was preceded in death by his father and mother (Gordon and Edyce), his brothers (Jackie and Roger), and sister (Sandra). Fred is survived by his spouse, Judy, of Burleson, Texas; his son, Shane Boles and family, of Vancouver, British Columbia, his daughters Staci Romero and family of Burleson, Texas, Kim Morgan and family of Burleson, Texas, Misty Cortina and family of Fort Worth, Texas, Danna Rutherford and family of Fort Worth, Texas, and Marci Boles and family of Burleson, Texas. his brother, Mike Boles of Cedar Key, Florida. He had six children, 15 grandchildren and 10 great-grandchildren. A visitation and memorial service will be held at Lucas & Blessing Funeral Home located at 518 SW Johnson Ave, Burleson, TX 76028 from 12 PM to 3 PM, November 1st. Burial will follow and be held at Burleson Memorial Cemetery from 3 PM to 4 PM. The family wishes to extend their gratitude for the support received from family, friends and the many people who have contributed to the care of Fred. Fred was a simple man and enjoyed the simple things in life. His idea of happiness was spending time with family, traveling and enjoying the beauty of nature. He worked relentlessly to build his business and took pride in supporting his family. In his leisure time, he enjoyed watching sports; from football, baseball, to basketball. Fred had an amazing sense of humor, which ranged from dry to sarcastic, and always cleverly delivered that humor with a bit of wisdom, imparting a lesson to be learned. He was a man of morals, values, and principles in which he would never compromise. He had a reputation for trust and honesty, which earned him the love of everyone he touched.

Freddie Gerald Boles, 69, passed away on Friday, October 18th, 2019 at Harris Methodist Hospital in Fort Worth, Texas. He was born on January 21st, 1950 in Winter Haven, Florida to Gordon and Edyce Boles. Fred grew up in Fort Meyers, Florida.... View Obituary & Service Information

The family of Freddie Gerald Boles created this Life Tributes page to make it easy to share your memories.

Send flowers to the Boles family.