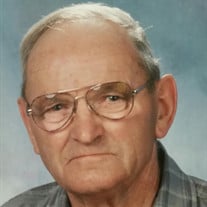 Hans Joachim Rockmann,90, was born January 19, 1928, in Halle Germany, and left his earthly life Wednesday, March 28, 2018, claiming the promise of a mansion in Heaven. Those left to cherish his memory include his wife, Jean Rockmann, 3 sons: Roland Rockmann, Reinhart Rockmann, Udo Rockmann, Corey Cooper and Kevin Cooper, and their families. 4 daughters: Heide Davis, Sylvia Haycox , Gudrun English, Dagmar Vogel, and their families. He is also survived by 24 grandchildren, and many great, and great great grandchildren. Hans was preceded in death by his first wife, Hilde, and by his son, Klaus. Hans had an uncommon life. Growing up in Germany he was drafted into the army during World War II where he was taken captive by American forces and placed into a POW camp. At the end of the war, he was released and returned to Germany. He was 17 years old. After the war Hans lived in East Germany where he was trapped after the construction of the Berlin Wall. He made a daring escape from East Germany to make his home in West Germany where he worked deep in the earth in a Uranium mine and as an inspector in a marble quarry. After retirement Hans traveled from Germany to Texas where he met his wife, Jean, when he was out for a walk, while living with his daughter Gudrun. Despite Jean not speaking German, and Hans not speaking English, they quickly became inseparable and were married in 2003, residing in Burleson until his death. John 14:1-2 1 Let not your heart be troubled: ye believe in God, believe also in me. 2 In my Father’s house are many mansions: if it were not so I would have told you. I go to prepare a place for you.

Hans Joachim Rockmann,90, was born January 19, 1928, in Halle Germany, and left his earthly life Wednesday, March 28, 2018, claiming the promise of a mansion in Heaven. Those left to cherish his memory include his wife, Jean Rockmann, 3 sons:... View Obituary & Service Information

The family of Hans Rockmann created this Life Tributes page to make it easy to share your memories.

Send flowers to the Rockmann family.