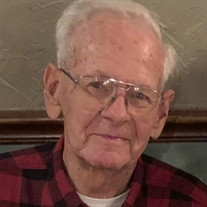 Harry Henderson Arrington, 85, of Alvarado passed away on Tuesday, December 18, 2018. Graveside Service: 9:30 a.m. Friday, December 28, 2018 at Dallas Fort Worth National Cemetery with military honors. Memorials: Donations may me made to the Shriners Children's Hospital in Harry's name. Harry was a kind, sweet and highly intelligent man who had a legendary stubborn streak and a dry sense of humor. He was an avid shooter in trap and target, he loved to listen to old county music, playing cards, mowing the lawn, sitting on the back porch with his dog (Baylor), antiquing, photography and golf. He was in the United States Navy from 1951 to 1954 as a radar operator flying a Martin PBM sea plane. He went off to boot camp and came home on leave, that's when he met grandma. He dated her and wrote letters to her when he was stationed in Alaska. When he got home from Alaska, he asked her to marry him. He then attended The University of El Paso where he studied engineering, earned a bachelor degree in physics and was the chief of campus police. Harry graduated with honors and began his career as an aerospace engineer. He started working which moved him and grandma to Minnesota, but the winters were too cold there so when Hughes Aircraft came looking for employees to hire and move to California he jumped at it. He worked for Hughes aircraft for 30 years retiring in 1988. He lived a good long life and is loved and missed by all of his family and friends left behind, but we take comfort in knowing he is with Jesus and reunited with loved ones. Harry was preceded in death by his wife of 63 years, Wilma Jean (June) Arrington; brother, Robert Graham Arrington and parents, Walter and Lois Arrington. Survivors: Son, Michael Elliott Arrington and wife Patricia; grandchildren, Amanda Ann Metro, Jennifer Michelle Stinnett, Matthew Michael Arrington; great-grandchildren, Grace Catherine Perez, Hana Molly Metro, Rylie Jo Arrington, Laila Merritt Arrington, twins Cru Stinnett, Sloan Stinnett and chosen daughter Dawn Marie Morgan and her husband, Craig Morgan.

Harry Henderson Arrington, 85, of Alvarado passed away on Tuesday, December 18, 2018. Graveside Service: 9:30 a.m. Friday, December 28, 2018 at Dallas Fort Worth National Cemetery with military honors. Memorials: Donations may me made to the... View Obituary & Service Information

The family of Harry Henderson Arrington created this Life Tributes page to make it easy to share your memories.

Harry Henderson Arrington, 85, of Alvarado passed away on Tuesday,...

Send flowers to the Arrington family.