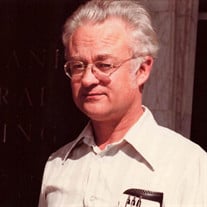 Harry L Phillips, 87, passed away January 21, 2021 at Community Health Care of Texas at Huguley. Visitation will be held from 4:00pm to 6:00pm, Wednesday, January 27, 2021, at Lucas & Blessing Funeral Home, 518 SW Johnson Ave., in Burleson. A graveside service will be held at 2:00pm, Thursday, January 28 at Burleson Memorial Cemetery. Harry was born January 4, 1934 in Birmingham, England to Harry and Dorothy (Summerfield) Phillips. He grew up in England and Germany. After high school, he gave up his British Citizenship to become an American Citizen and serve in the United States Air Force from 1956 to 1960 as a tail gunner / belly gunner on B52s and B36s. After serving in the Air Force, he worked for Soil Conservation Services and the Corp of Engineers until he retired with 20 years of service. He married Barbara Young in 1958 in Fort Worth, and they were happily married for 62 years. Harry was a member Tarrant Aero Association, Civil Air Patrol, and the Experimental Aircraft Association. He enjoyed flying and rebuilding small aircrafts. Harry was preceded in death by his parents, Dorothy and Harry Phillips; sister, Patricia Phillips; and nephew, Kent Phillips. He is survived by his wife, Barbara; son, Chris Phillips; daughter, Michelle Phillips; brother, Ronald Phillips and wife, Brenda; grandchildren, Daniel and Elizabeth de Jesus; two nephews; and other relatives. The family wishes to extend their gratitude to the nursing staff on the 3rd floor at Huguley Hospital for the wonderful care they provided for Harry, to Heather the transitional nurse coordinator at Huguley Hospital for her compassion, understanding, and assistance during this difficult time, and to Community Health Care of TX at Huguley for their caring and compassionate hospice services.

The family of Harry Lewis Phillips created this Life Tributes page to make it easy to share your memories.

Send flowers to the Phillips family.