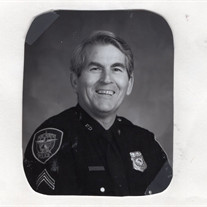 Paul Click, 92, passed away on May 18, 2019. He was born December 10, 1926 in Santa Anna, TX to May Williams Click and George Click, the oldest of three sons. At the age of one, Paul moved with his family to the Duck Creek community near Paint Rock, TX in Concho County. He graduated from Paint Rock High School in 1944 and joined the US Navy. Paul attended boot camp in San Diego and after that was stationed on Ebeye an Island in the Marshall Islands. After receiving an Honorable Discharge, he returned to Paint Rock and began working as a Manager for Armstrong Lumber Company at the age of 21. Paul married Lillie Bell Duckworth in a double ceremony with Maurine Warren and Tracy Comerio on February 28, 1948. During a severe drought, the Clicks moved to Fort Worth for a job in a better economy. He opened and operated a new Texaco service station at the corner of I-35 and Seminary. For a short time, he and an old friend formed Corsair Marine Corp. and built boats. During this time he met and became friends with Bill Wilson, a young Fort Worth Policeman. Having a lifelong interest in law enforcement, Paul joined the FWPD and had a 30-year career there. While working the Hit and Run division he was humbled when awarded the Outstanding Officer of the Year. Soon after retirement in 1985 Paul and Lillie traveled for several years. When land and a big house became a bit too much, the couple moved into Burleson and later to Heritage Place, a retirement center. Paul was a lifelong Methodist, a member of the First United Methodist Church Burleson since 1970. He was preceded in death by his parents, his loving wife Lillie, daughter Patricia and a brother Elton Click. Survivors: Those left to cherish the memories are his daughter, Paula McAnally and husband Jimmy; grandchildren, Jamie Nix and wife Amber, Jeremiah Nix, Henry McAnally, Della McAnally Galvan, Kristan Loya and husband Curtis, Rowdy McAnally and wife Tiffany, Rory McAnally, and Emily Yanez and husband Pete; 14 great-grandchildren; and numerous friends.

Paul Click, 92, passed away on May 18, 2019. He was born December 10, 1926 in Santa Anna, TX to May Williams Click and George Click, the oldest of three sons. At the age of one, Paul moved with his family to the Duck Creek community near Paint... View Obituary & Service Information

The family of James Henry Paul Click created this Life Tributes page to make it easy to share your memories.

He was born December...