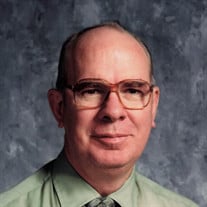 James Harral Ellis, 88, passed away Wednesday, May 4, 2022 at Elk Creek Senior Living in Burleson. Visitation will be held from 5:00pm until 7:00pm, Tuesday, May 10, 2022 at Lucas & Blessing Funeral Home, 518 SW Johnson Ave., in Burleson. Funeral services will be held at 11:00am, Wednesday, May 11, 2022 at Lucas & Blessing Funeral Home. A graveside service will be at 2:00pm at Morgan Cemetery, in Morgan. James was born January 29, 1934 in Denton, Texas to Joseph and Willie Harrall Ellis. He grew up in Denton and graduated from Denton High School in 1952. After high school, he joined the United States Coast Guard and served for four years. He served in the Korean War, and earned the Korean Service Medal. He was honorably discharged as an Engineman Petty Officer -2nd Class. James attended University of North Texas in Denton and Howard Payne University in Brownwood, earning a bachelor’s degree. He also earned a Bachelor’s Degree of Divinity from Southwest Baptist Seminary and a master's degree from TCU. He began his teaching career in Argyle and taught in Burleson for 27 years. He pastored at First Baptist Church of Morgan for almost seven years. He also pastored five other churches in his walk of life. In 1960, James married Gaile Harville in Aubrey, Texas, and they were happily married for 61 years. He enjoyed reading, especially his Bible, traveling, watching sports, and visiting with friends and family. James was preceded in death by his parents, Joseph and Willie Ellis; brothers, Alvin, John, Orville, Donny, and Francis Ellis; and sisters, Norma John, Marie Lancaster, Christine Jackson, and Ila Belle Brown. He is survived by his wife, Gaile Ellis and numerous nieces, nephews, and other relatives. In lieu of flowers, the family requests memorial donations be made to the Texas Baptist Men or American Diabetes Association. The family wishes to extend their gratitude to Heart to Heart Hospice, family, and friends for their love and support.

The family of James H. Ellis created this Life Tributes page to make it easy to share your memories.

Send flowers to the Ellis family.