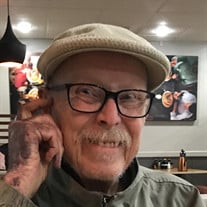 Jerry D. Long, 87, of Burleson, passed away Sunday, April 23, 2017 at a local hospital. Graveside services will be held at 10:15 AM, Friday April 28, at the Dallas-Ft. Worth National Cemetery, 2000 Mountain Creek Parkway, Dallas, TX 75211, lane B. Visitation will be held from 6:00 until 8:00 PM Thursday, April 27, at the Lucas & Blessing Funeral Home, 518 S.W. Johnson Ave., Burleson, TX 76028. Mr. Long was born September 16, 1929 in Chillicothe, Missouri, to John and Mary Bennett Long. Jerry grew up in St. Joseph, Missouri during the depression along with his 2 sisters, Merideth and Janet. He was in the Navy 4 years and served on an aircraft carrier during the Korea War. Jerry loved to play golf. He played almost everyday when he retired from Lockheed in 1994. He went to the Missouri School of Mines and earned a Bachelors Degree in Electronics Engineering. After graduating, he came to Texas and began working for Convair which eventually became Lockheed. Jerry was part of the team that designed the weapons testing system for the F-16. Jerry is survived by his son, Jerry D. Long, Sr.; Grandchildren, Brittani Long-Lowrey (Brandon), Jerry Dewayne Long, Jr., Lynsi Long; great-grandsons, Zachary and Ethan Lowrey; sisters, Merideth Littrell ( Melvin), Janet Zirkle (Roland).

The family of Jerry Don Long created this Life Tributes page to make it easy to share your memories.

Send flowers to the Long family.