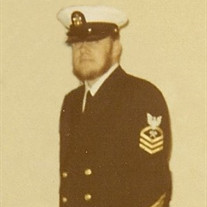 Jesse Herbert Umphenour, 82, passed away on 22, August, 2019 at home in Burleson, Texas. He was born on November 30, 1936 in Deerpark, Washington to Henry and Marie (née Vronan) Umphenour. Jesse grew up on a farm in Deerpark, Washington. He graduated from Springdale High School in 1955. In 1951, at the age of 15, he committed himself to the United States Navy and enrolled in October of 1955. He served for a total of 23 years and served in both the Korea and Vietnam wars. He retired in July 1975, achieving the rank of Senior Chief. After his service, he attended California State Polytechnic University, Pomona where he earned a Bachelors in Business. Afterwards he joined the teaching staff of the Computer Science department. He received the Distinguished Staff Emeritus award in 1999. Jesse married his sweetheart Patricia in 1961 in Coeur d’Alene, Idaho. They were happily married for 58 years. Jesse enjoyed westerns, country music, working with his tools, vanilla milkshakes, practical jokes and teasing his wife to make her smile. Jesse was preceded in death by his parents, seven brothers and sisters, and cousins. Jesse is survived by his spouse Patricia; his four sons Jess (wife Lidija), Michael, David (wife Leva), and Bob (his wife Jennifer); his sister Janice and twin brother Jim; his five grandchildren Ashley (her husband Nick), Nicole, Christopher, Sean, Jonathan, and Alexander; and other relatives. A rosary will be held at 7pm, October 4, 2019 at St. Ann’s Catholic Church in Burleson, Texas. A memorial mass will be held at St. Ann’s Catholic Church in Burleson, Texas at noon on October 5, 2019. A second service will be held At noon on November 2, 2019 at Holy Redeemer in Montrose, California. In lieu of flowers the family requests memorial donations be made to City of Hope, Cancer Hospitals or the Paralyzed Veterans of America. The family wishes to extend their gratitude to Heritage Hospice, St. Ann’s Catholic Church, and Chris at Lucas and Blessing Funeral Home.

The family of Jesse Herbert Umphenour created this Life Tributes page to make it easy to share your memories.

Send flowers to the Umphenour family.