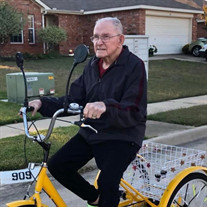 James Franklin (Jimmy Frank) Brown, 95, passed away April 14, 2022 at home in Burleson. He was born October 29, 1926 in Hill County to Frank and Berma (Hill) Brown. Jimmy grew up in the Towash/Whitney are. He went to join the Army in 1944 with his friends, but he was rejected because he was a farmer and the only child of his widowed mother. Instead of military service, he served his country by farming cotton to provide textiles. After the war ended, construction began in May 1947 on the Whitney Dam at the Brazos River in the section of Towash/Whitney where Jimmy and his mother lived and worked as Share Croppers. Because their home was located right in the middle of the area to be flooded, they moved to a small house in Hillsboro. Soon after, Jimmy heard about a new Steel Mill that was hiring in Fort Worth. He moved to Fort Worth with his cousin and went to work for Texas Steel as an Ingot Checker and later a Crane Operator. He worked there for about 35 years. When Texas Steel sold out and closed part of its operations around 1984, he was laid off/ retired. He started driving a big truck and transporting Mobile Homes, and he later went into business for himself as a pilot driver, escorting Mobile Homes and other Wide Loads. He was baptized in the creek by Towash Baptist Church in 1939 and most recently attended church at Harvest Assembly of God. Jimmy married Bessie Mae Mathews on November 13, 1949 in Carlsbad, New Mexico, and they were happily married for 67 years. They had 7 children, 13 grandchildren, 21 great-grandchildren and 10 great-great grandchildren whom they loved very much. Jimmy enjoyed water skiing, snow skiing, traveling, camping and riding his bike. He was preceded in death by his parents, Frank and Berma Brown; wife, Bessie Mathews Brown; children, Ronald Brown, Tammy Brown, Judy Freeman and Denise Hay-Cisco. Jimmy is survived by his children, Rita, Rhonda and husband, Doyle, Larry and wife, Jennifer, son’s-in-law Jim Freeman and Markus Cisco; grandchildren, Tina, Deanna, Michelle, Kevin, Brandi, Keith, Christi, Charlie, Tami, Steven, Laura, Elia, and Eliseo; great-grandchildren, Kristin, Ashlea, Brittany, Maci, Jake, Christopher, Lauren, Tyler, Gavin, Sam, Justin, Noah, Alex, Addison, Samantha, Easton, Piper, Deacon, Faustine, Wyatt, Esther; great-great grandchildren, Savannah, Adelaide, Bryce, Alayjah, Ryleigh, AJ, Logan Tice, Raylynn, Kiersley and Samuel; and numerous nieces, nephews and other relatives. A visitation will be held at Lucas and Blessing Funeral Home, 518 SW Johnson Ave., Burleson, TX 76028 from 5:00 – 7:00, April 19, 2022. Funeral service will be held at Harvest Assembly of God, 7501 Crowley Rd., Ft. Worth, TX 76034 at 11:00, April 20, 2022. Burial will follow at Laurel Land Memorial Park Cemetery, 7100 Crowley Rd. The family wishes to extend their gratitude to Heart to Heart Hospice, Lucas and Blessing Funeral Home and Harvest Assembly of God. – 1“Do not let your hearts be troubled. Trust in God; trust also in me. 2 In my Father’s house are many rooms; if it were not so, I would have told you. I am going there to prepare a place for you. 3 And if I go and prepare a place for you, I will come back and take you to be with me that you also may be where I am. – John 14: 1-3

James Franklin (Jimmy Frank) Brown, 95, passed away April 14, 2022 at home in Burleson. He was born October 29, 1926 in Hill County to Frank and Berma (Hill) Brown. Jimmy grew up in the Towash/Whitney are. He went to join the Army in 1944... View Obituary & Service Information

The family of Jimmy Brown created this Life Tributes page to make it easy to share your memories.