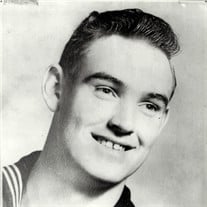 John William McKenzie, Jr., beloved father of five, grandfather of eleven, great-grandfather of two, traveler, businessman, entrepreneur, engineer, and veteran died Tuesday, February 22, 2022. He was 88 years old. A celebration of life service will be held on March 5, 2022 at 1:00 pm at Lucas and Blessing Funeral Home in Burleson, Texas with internment at the DFW National Cemetery at a later date. Click here for a live stream: https://video.ibm.com/channel/23855904/video/2rg5ce John's life began March 4, 1933 in Amarillo, TX as the son of John William McKenzie, Sr. of Quanah, Texas and Rachel Faye Thornton of Togo, Arkansas. The date of his birth coincided with the inauguration of Franklin Delano Roosevelt, where Roosevelt famously said “let me assert my firm belief that the only thing we have to fear is fear itself.” Although John obviously could not have heard or understood this message as a newborn, his spirit captured that moment. His life was driven by hope and aspiration—not fear. John was born during the height of the Great Depression, and his hometown of Amarillo was the capital of the dustbowl. His upbringing reflected the resilience people found when facing the hardships and deprivations of that era. He shared a roof with nine siblings. He was very close to his father, who was a mechanic. The family moved frequently. And yet, even as a child, John did not limit his aspirations to the circumstances in which he was born. As a boy he shined shoes, picked cotton, and sold newspapers—anything to earn a little extra money and help his father. In high school, John developed an interest and talent for electronics. This talent would ultimately take him all over the world. His journeys began when he volunteered to join the United States Navy at 17 years old. He attended the Navy’s electronic training school where, out of a class of 125 students, only 25 managed to graduate. He was among the top five graduates. He would sometimes joke that a visit from his then-girlfriend distracted him from his studies and caused him to fall in the rankings. During the Korean War, John served on the USS Essex aircraft carrier. He was responsible for, among other things, maintaining the ship’s anti-aircraft defense radars. The lives of thousands of men rested on his 18-year-old shoulders. Despite his tender age, he did not waver in discharging his duties. He also helped evacuate Chinese Nationalists to Taiwan as the Communists took control of mainland China. For his service, he was awarded the China Service Medal. After completing his term in the Navy, John joined the Atomic Energy Commission. He worked in the nuclear testing program in the South Pacific and at White Sands. He was part of the team that detonated and recorded the effects of nuclear explosions. John would later start numerous small businesses in Africa, the Middle East, Europe, the United States, and Asia. Most of his businesses focused on installing communications systems. He also engineered several innovative devices including mobile radios and water purification units. John had an uncanny, Forrest-Gump-like ability to appear during moments of historic change in the countries where he lived. He was a first-hand witness to coups, successful independence movements by former colonies, and civil wars. His passports overflowed with stamps and visas from every corner of the globe. He kept a jar full of small change in global currencies, much to the delight of his young children. He was a legendary romantic with great taste in women. John loved his family and always talked about them with pride. He is survived by all of his children, grandchildren, and great-grandchildren, as well as one sister and one brother. John had a wonderful sense of humor and loved the comedian, Peter Sellers. He was a very gifted, natural salesman. He was also charismatic, genuine, and generous to a fault. He was not perfect. He took risks that sometimes did not work out. He could be impulsive and stubborn. John's work and travels sometimes took him away from home for long stretches. But these qualities were all part of the full package of who he was, and this full package will be dearly missed. In lieu of flowers, donations in his memory may be made to the Veteran of Foreign Wars (https://heroes.vfw.org/page/21776/donate/1?ea.tracking.id=homepage). Rest in Peace, John. We love you.

Send flowers to the McKenzie family.