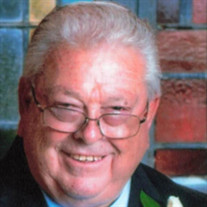 Johnie Griggs, 77, passed away February 16, 2022 at Burleson Nursing Home & Rehab. A visitation will be held from 4:00pm until 6:00pm, Sunday, February 20, 2022 at Lucas & Blessing Funeral Home, 518 SW Johnson Ave, in Burleson. A graveside service will be held at 10:00am, Monday, February 21, 2022 at Burleson Memorial Cemetery. He was born March 6,1944 in Hyannis, Massachusetts to Bud and Harriet (Chamberlain) Griggs and grew up in Stamford, Texas. Johnie worked for Baker Hughes as a machinist for 21 years, and he retired in 2009. Johnie married Rita in 1977 in Midland, Texas, and they were happily married for 44 years. He loved to go fishing with his boys and play with his grandchildren. He was preceded in death by his parents, Bud and Harriet Griggs. Johnie is survived by his wife, Rita of Burleson, Texas; sons, Wayne Griggs and wife, Michelle of Burleson Texas and Christopher Griggs and wife, Shawna of Cleburne, Texas; grandchildren, Trevor Griggs, Savanna Griggs, and Kinsey Griggs; great-grandchildren, Anthony, Ben, Eleanor, Delilah, and Harper; and other relatives. He was loved by many and will be missed by all. The family wishes to extend their gratitude to Burleson Nursing Home & Rehab, Lucas & Blessing Funeral Home, New Beginnings Church and friends.

The family of Johnie Griggs created this Life Tributes page to make it easy to share your memories.

Send flowers to the Griggs family.