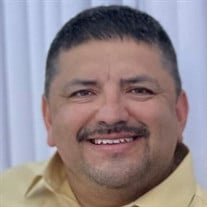 Jose Alfredo Agundis, 49, was called home to our Lord, unexpectedly, March 28, 2022 while on vacation in Mexico. He was surrounded by his wife and relatives. A closed casket visitation will be held from 12:30pm until 2:00pm, on Thursday, April 14, 2022 at Lucas & Blessing Funeral Home, 518 SW Johnson Ave., in Burleson, with a memorial service immediately following. A graveside service will be held at 11:00am, Friday, April 15, 2022 at the Dallas Fort Worth National Cemetery, 2000 Mountain Creek Parkway, in Dallas. Jose was born January 25, 1973 in San Luis, Potosi. He grew up in the panhandle town of Muleshoe, Texas before coming to Fort Worth. He joined the United States Army in 1994 and served for 21 years. He moved up in ranks and led men through 4 tours of war. He served in Operation Iraqi Freedom and was the recipient of the Bronze Star Medal, Iraq Campaign Medal with two campaign stars, Afghanistan Campaign Medal with campaign star, Joint Service Commendation Medal, Army Commendation Medal, Army Achievement Medal, Army Good Conduct Medal, Army Reserve Components Achievement Medal, National Defense Service Medal with bronze star, Global War on Terrorism Expeditionary Medal, Global War on Terrorism Service Medal, Armed Forces Reserve Medal, Overseas Service Ribbon, and Army Service Ribbon. He was honorably discharged in 2014, achieving the rank of E6 – Staff Sergeant. He was a contract security officer for the General Services Administration and for the Department of Homeland Security. Jose married Petra Soledad in 1990 in Amatepec, edo. de México, and they were happily married for 32 years. He enjoyed working out, cycling, getting drinks with friends, long walks with his dog, Ranger and spending time with family, especially his grandkids. Jose was preceded in death by his mother-in-law, Ma. Trinidad Vences; son, Christian Agundis; and fallen battle buddies. He is survived by his wife and companion, Soledad Agundis; sons, Elier A. Agundis, Jose A. Agundis, Jr., and Jose C. Agundis; daughter, Saydie D. Agundis; son-in-law, Carlos Cabrera; daughters-in-law, Shawna Zellers and Erika Agundis; parents, Justo Agundis Herrera and Margarita Agundis Saldana; brother, Raul Fernando Agundis; and numerous grandchildren, nieces, nephews, friends and colleagues. Forever in the hearts of his grandchildren. Lastly so many friends and colleagues. He was a beacon and a leader. He will be sorely missed. We hope to give our fallen hero a proper farewell filled with love.

Jose Alfredo Agundis, 49, was called home to our Lord, unexpectedly, March 28, 2022 while on vacation in Mexico. He was surrounded by his wife and relatives. A closed casket visitation will be held from 12:30pm until 2:00pm, on Thursday, April... View Obituary & Service Information

The family of Jose Alfredo Agundis created this Life Tributes page to make it easy to share your memories.

Jose Alfredo Agundis, 49, was called home to our Lord, unexpectedly,...

Send flowers to the Agundis family.