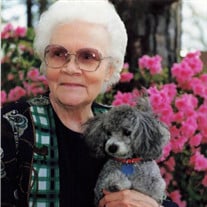 Joyce Kostenko, 94, passed away on the March 7, 2022 at her home in Burleson, Texas. A graveside service will be held at 2:30 on Monday, March 14, 2022 at Burleson Memorial Cemetery at 490 Memorial Plaza, in Burleson. Joyce was born March 8, 1927 in Bethany, Missouri to Ernest Long and Veta Martin. She grew up in Bethany and later in Nebraska. She graduated from Platte Valley Academy in Shelton, Nebraska in 1944. After high school, she first attended Union College in Lincoln, Nebraska. Later she attended Baptist Christian College in Shreveport, Louisiana, where she received a Bachelor of Arts Degree in Elementary Education. Joyce married Peter Kostenko in 1947 in her mother’s home in Bethany, and they were happily married for 62 years. Together, they were a ministry team beginning in Colorado. Joyce accompanied Peter on the piano or organ when he sang. She also played solos on the vibraharp. The congregation also enjoyed the special chalk drawings she made. Her skills were wide and varied. Before the days of instant printing, Peter and Joyce would lay out wide material and paint a backdrop for church camp meetings or multi-state youth conferences. They also planned and directed the music for these large events. When Peter was youth director in Missouri and the Carolinas, Joyce filled many roles from cook on a canoe trip down a remote Missouri river, to organizing all the crafts and supplies for summer camps. Joyce even braved lizards, chiggers, and snakes on the Lake of the Ozarks as a new youth camp was carved out of the rough terrain. She began teaching in Charlotte, North Carolina. Her last teaching assignment was in Shreveport, Louisiana at the Shreveport Adventist Jr. Academy. Joyce was a master teacher. She spent many hours preparing materials. Special learning experiences like earning a sea shell honor helped broaden the world for the young people. One student came back later commenting, "Mrs. K., I'm glad you pushed us through Algebra and Biology. I knew how to study and learn at Ozark Academy." Joyce was a member of the Seventh-day Adventist Church. She enjoyed ceramics, birds, and gardening. She adopted many cats that had been dropped off in her neighborhood. She was known for her generous spirit. She was preceded in death by her parents, Ernest and Veta Long; and step-father, Bert Tenney. Joyce is survived by her daughters, Dawn Kerbs and husband, Richard of Burleson, Texas and Janell Hurst and husband, Van of Shattuck, Oklahoma; and grandchildren, Jason Kerbs, Whitney Proctor, and Kortnye Hurst. In lieu of flowers, the family requests memorial donations be made to ADRA International. Call (800) 424-2372; request an in "Honor Card" and earmark the gift for the Ukraine Emergency Refugee Fund. The family wishes to extend their gratitude to her special care givers: Alma Bustamante, Lynne Preston, Sabra LeBlanc, Ana Miranda, and Heather Weaver, Gateway Hospice, Dr. Mike Polski.

Joyce Kostenko, 94, passed away on the March 7, 2022 at her home in Burleson, Texas. A graveside service will be held at 2:30 on Monday, March 14, 2022 at Burleson Memorial Cemetery at 490 Memorial Plaza, in Burleson. Joyce was born March 8,... View Obituary & Service Information

The family of Joyce Kostenko created this Life Tributes page to make it easy to share your memories.

Send flowers to the Kostenko family.