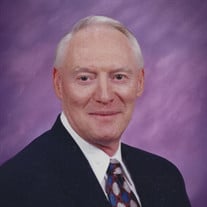 Kenneth Ray Lewis, 85, of Cleburne went to be with his Lord and Savior on February 17, 2022. The celebration of life will be held at Lucas & Blessing Funeral Home at 518 S.W. Johnson Avenue, Burleson, TX 76028 on Sunday, February 20 at 2 p.m. A visitation will be held at the Lucas & Blessing Funeral Home at 518 S.W. Johnson Avenue, Burleson, TX 76028 on Saturday, February 19 where the family will be greeting friends and relatives from 3 – 5 p.m. He was born March 7, 1936, in Hamlin, TX to the late Oscar Ray Lewis and Hazel Jacobs Lewis. He graduated from the University of Oklahoma in 1960 with a Bachelor of Science in mechanical engineering and started his 32-year career with TXU in Monahans and Ft. Worth, TX before moving to Graham, TX where he managed the Graham Power Plant for 17 years. He later relocated to Big Spring, TX in 1993 to work for Falcon Seaboard until he retired. Ken served on the board of Camp Arrowhead for 20 years and was honored with the Distinguished Service Award in 2020. He was a very active member of The First Church of Nazarene in Graham and Big Spring, TX. He married Martha Jane Moore on December 17, 1966. They were happily married for 49 years until she passed away. He married his second wife, Ann, on October 8, 2017. Ken was preceded in death by his first wife, Martha Jane Lewis. Ken is survived by his second wife, Ann of Cleburne, TX; son Kevin Lewis and wife, Theresa Lewis of Rockwall, TX; daughter, Sara Lewis Fleming and husband, Steven Fleming of Shavano Park, TX; grandson, Sawyer Fleming; sister, Sue Kinzler and husband, Clari of McCall, Idaho. In lieu of flowers the family requests memorial donations be made to Arrowhead Camp & Retreat Center at 5236 N FM 199, Cleburne, TX 76033. The family wishes to extend their gratitude to Maria, Blanca, Bitris and Community Healthcare of Texas for the care they provided.

The family of Kenneth Ray Lewis created this Life Tributes page to make it easy to share your memories.

Kenneth Ray Lewis, 85, of Cleburne went to be with his Lord and...

Send flowers to the Lewis family.