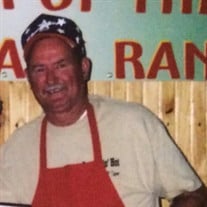 Leonard “Grady” Pomykal, 79, long-time resident of Belfalls, TX, died peacefully Friday, October 9, 2020 at Trinity Mission Health and Rehabilitation in Burleson. Per his wishes, no funeral service will be held. His final resting place will be Clover Hill Cemetery in Lott, Texas. Grady was born January 5, 1941 in Falls County, to Benjamin and Grace Pomykal. He served in the Air Force Reserves for 2 years after high school, and then he came back to Bell County to start a farm and ranch business, which he had for over 50 years. He raised many pigs and cattle for 4H & FFA members throughout the state. Grady was a member of Bell County Youth Fair Board, Cen-Tex Young Farmers Association, Troy Area Fair Boosters, and Central Texas Barbeque Association. He was preceded in death by his parents, Benjamin and Grace Pomykal; sister, Juanita Barganier; and brother, Harold Pomykal. Grady is survived by his wife, Patricia Southerland Pomykal of Burleson, TX; daughter, Pamela Berndt and husband, Robert of Joshua, TX; son, Joe Pomykal and wife, Bridgette of Midland, TX; brother, Donald Pomykal of Childress, TX; grandchildren, Joseph Berndt, Justin Berndt, Jason Berndt, Brayden Pomykal and Britton Pomykal; and great-grandchildren, Lorena, Hayden, Emory and Mila. Memorials can be made to the Alzheimer’s Association at https://www.alz.org/

The family of Leonard Grady Pomykal created this Life Tributes page to make it easy to share your memories.

Send flowers to the Pomykal family.