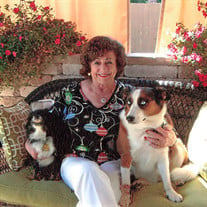 Linda Rudy Molina, 79, passed away Tuesday December 29, 2020 at Arlington Memorial Hospital. A memorial service will be held at 2:00pm on Thursday, January 7, 2021 at Lucas & Blessing Funeral Home, 518 SW Johnson Ave., in Burleson. She was born January 25, 1941 in Toledo, Ohio to James and Sarah (Sally) Spitzer Rudy. Linda grew up in Lambertville, Michigan, just outside Toledo. She graduated from Ottawa Hills High School in Toledo in 1959. She attended Stephens College in Columbia, Missouri and earned a Bachelor of Arts degree from the University of Michigan in Ann Arbor, Michigan. After graduation, Linda moved to California where she taught middle school for several years. During that time, she earned a Master of Arts degree from California State University, Los Angeles. She left teaching to become an insurance agent. Linda was a member of the Daughters of the American Revolution, Colonial Dames, and Delta Delta Delta Sorority. While living in California, she continued her life-long love of horseback riding. She was an accomplished rider and once, while in high school, rode on a dressage team in an international competition in Canada. After high school, her beloved horse Coffee Cream went with her to Stephens. In addition to riding, Linda enjoyed taking her small boat to Catalina Island on weekends. Linda was also a dog lover, especially mini–Australian Shepherds, and always had two or three by her side. Linda moved to Burleson, Texas in 2005 to be closer to family. She became active in a few organizations and especially enjoyed the volunteer work she did with the Burleson Chamber of Commerce Honey Tour. Recently Linda won the Chamber's Volunteer of the Year award for her involvement in helping make the Honey Tour a big success year after year. She was praised for always stepping in to help the Chamber when asked. She also supported several animal rescue organizations. Linda was semi-retired, continuing to work as an insurance agent until 2018. Linda is preceded in death by her parents, and niece Chris Russell. She is survived by her sisters, Sarah (Frank) Terhune Hanover, Pennsylvania, and Victoria Blanton, Burleson, Texas. Nieces Debbi (Frank) Edwards, Austin, Texas, Heidi (Doug) Weaver, Granbury, Texas, and nephew Christopher (Cindy) Terhune, Fort Mill, South Carolina, great nieces and nephews and other relatives. In lieu of flowers the family requests that memorial donations be made to The Burleson City Animal Shelter, 518 SW John Jones Ave. Burleson, TX 76028, The American Cancer Society, 1300 Summit Ave, Fort Worth TX 76102, or Trinity Episcopal Church, 3401 Bellaire Dr. South, Fort Worth TX 76109. The family would like to extend their gratitude to the 4th floor health care workers at Arlington Memorial Hospital, Trinity Episcopal Church, Fort Worth, and Lucas and Blessing Funeral Home.

The family of Linda Rudy Molina created this Life Tributes page to make it easy to share your memories.

Send flowers to the Molina family.