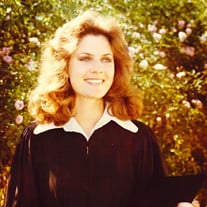 Lisa Dawn Jenkins – Lanham was born in Dallas, TX, on July 12, 1956, to William Jack Jenkins and Geraldine Sheeba Sharpe – Jenkins, and was called home by her Lord and Savior on March 11, 2022. Lisa was raised in Grand Prairie, TX, with her two big sisters, Diana Carol Jenkins – Hendricks and Kathleen “Kathy” Jenkins - Duvall, who loved to dote on their baby sister. As an outgoing and vivacious teen, she was involved in many activities at her high school alma mater, South Grand Prairie High School, where she graduated with honors in 1974, and made many life-long friendships. Lisa went on to continue her education at The University of North Texas, eventually earning her M.S. Ed – Educational Psychology, and began her career serving as the Assistant Dean of Students at The University of North Texas for twelve years. While living in Denton, TX, and studying and working at UNT, Lisa welcomed her son, the absolute light of her life, Jack Overton Lanham III, on March 30, 1985. As she continued her career, moving away from UNT to labor relations in the corporate world, her favorite “job title” was being Jack’s mom. She loved spending time with Jack and his friends, taking them fishing, playing video games, watching movies, and other fun boy stuff. After ten years working in human resources, Lisa went back to her true passion, which was education. She served as Inclusion Specialist and Educational Diagnostician in Duncanville, Cedar Hill, and Mansfield ISD’s before becoming the Director of Special Education at Eagle Advantage Academy in Duncanville. She retired as the Division Director of Special Programs at Eagle Advantage Academy for the Dallas/Fort Worth Area. Lisa had a true love for the students at her campuses and found focusing on special education to be very rewarding. On January 9, 2016, Lisa became “Nana”. If Jack was the light of her life, her granddaughter, Zoë, was the spark that lit the flame. Her most treasured times were the times she spent loving on and caring for Zoë. After her retirement, Lisa moved to Burleson, TX, with Jack and Zoë to become full-time Nana, where she spent her days centered around her precious granddaughter. She was the Nana that got to the school pick-up line an hour early to be one of the first cars in line (anything further back than 5 or 6 was unacceptable), the Nana that taught Zoë how to read before she even started kindergarten, and the Nana that had an endless supply of hugs and kisses. The most important thing Lisa would want to be remembered for would be Zoë’s Nana and Jack’s Mom, but the list is long. Lisa was a bright light in this world, touching countless people with her always enthusiastic, positive energy. She loved music and had the most beautiful singing voice. She loved animals, especially her doggies, Max, Syndney, and Sookie. She was a loving, devoted daughter, sister, aunt, great-aunt, friend, and neighbor. If you were Lisa’s “people”, she had your back, unconditionally. Lisa also had a great love for Jesus, and her family finds peace knowing she was welcomed into Heaven and reunited with loved ones that went before her. Lisa was preceded in death by her parents, Jack and Gerry Jenkins, and her sister, Kathy Duvall. She is survived by her son, Jack Lanham; her granddaughter, Zoë Lanham; her sister, Diana Hendricks (Tommy); her brother-in-law, Jimmie Duvall; her nieces and nephews, Jeffrey Duvall, Katy Lampson (John Paul), John Hendricks (Sabrina); her great-nieces and nephews, Matthew Lampson, Jared Lampson (Kori), Nicolas Hendricks, Hannah Hendricks, Benjamin Hendricks, and Jackson Hendricks, and Jack’s dad (Zoë’s Papa), Joe Lanham (Michele).

The family of Lisa Dawn Lanham created this Life Tributes page to make it easy to share your memories.

Send flowers to the Lanham family.