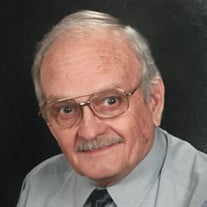 Melvin “Vince” Necaise went to his everlasting heavenly home peacefully January 23, 2021 in Burleson, Texas at the age of 79. A graveside service will be held at 11:00am, Friday, February 19, 2021, at Dallas Fort Worth National Cemetery. Vince was born August 5, 1941 in Hobbs, New Mexico. He joined the Air Force after graduating from Hobbs High School, hoping to travel the world. But he ended up being stationed in Clovis, New Mexico, just 120 miles from his hometown. However, Clovis turned out to be as far as he needed to go, as this is where Vince met his wife of 55 years, Mildred Robinson Necaise. Millie and Vince Necaise moved back to Hobbs to live and raise their children there. In 2007, Vince and Millie moved to Burleson, Texas, to be closer to their children and grandchildren. Vince stayed in Burleson for the rest of his life. He was preceded in death by his loving wife, Millie; parents, Goldie and Melvin Necaise; and brother, James Necaise. Vince leaves behind his children and their spouses, Michael Necaise and wife, Terrie; Michele Gustin and husband, David and Mark Necaise, and wife, Jennifer; grandchildren, Brooke Ballew, Clint Price, Cody Necaise, Blake Gustin, Breanna Foskit, Braden Necaise, Stacey Edington, and Kyle Vaughan; great-grandchildren, Dylan and Slaid Ballew, Lincoln Price, Vincent Foskit, Avery and Wesley Laznovski, Caden and Emery Vaughan; and brother, John Necaise and wife, Cathie. We are certain that once again, he is right where he is supposed to be, rocking in his chair right next to Millie, while she sews. The game is on, the tea glass is in his hand, and a smile is on his face as he watches his family from above.

The family of Melvin Vincent Necaise created this Life Tributes page to make it easy to share your memories.

Send flowers to the Necaise family.