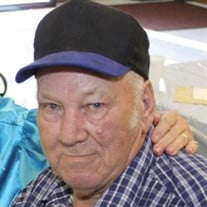 Michael Valentine Brown, 80, passed away April 3, 2022 at his home. Visitation will be held from 10:00am to 12:00pm, Saturday, April 9 at Lucas & Blessing Funeral Home, 518 SW Johnson Ave., in Burleson. An informal lunch and memorial service will be held following the viewing on Saturday April 9, from 12:30pm to 2:30pm at Alsbury Baptist Church, 500 NE Alsbury Blvd., in Burleson. Mike was born February 18, 1942 in Cleburne, to MK and Hattie O’Neal Brown. He grew up in Johnson County and attended Burleson High School. He joined the Army in 1964 and served for 2 years. He was the recipient of Sharpshooter and Good Conduct awards, and was honorably discharged in 1966. Mike began working for Nissan Auto as a Master Technician where he worked for 42 years before he retired in 2010. He married Helen in 1966 in Fort Sill, Oklahoma, and they were happily married for 56 years. He enjoyed rebuilding auto engines, traveling, reading and most of all his grandchildren. Mike was preceded in death by his parents, MK and Hattie Brown; brother, Bill Skinner; and sister, Jenneedell Brown Stiles. He is survived by his wife, Helen; son, Brian Brown and wife, Stefanie and their children, Jacob Brown and wife, Miranda Smith and children, Ellie Brown and John Smith, and Zachary Brown and wife, Reagan and son, Jasper Brown; daughter Huana Brown and children, Taylor Anderson and wife, Bridgett and children, Trinity and Naomi Anderson, Cheyanna Moore and husband, Timothy and children, Kingston Royce Knox Moore and Kandie Moore, and Dalton Anderson; son, William Brown and his children, Sara Brown, Kelsi Ruiz, and Ethan Ray; 3 bonus grandchildren and 4 bonus great-grandchildren of Stefanie Brown; brother, John Patrick Brown, and sisters, Ann Murdock and husband, Jim and Stella Jo Greenwood, and husband, Gary.

Michael Valentine Brown, 80, passed away April 3, 2022 at his home. Visitation will be held from 10:00am to 12:00pm, Saturday, April 9 at Lucas & Blessing Funeral Home, 518 SW Johnson Ave., in Burleson. An informal lunch and memorial service... View Obituary & Service Information

The family of Michael Valentine Brown created this Life Tributes page to make it easy to share your memories.