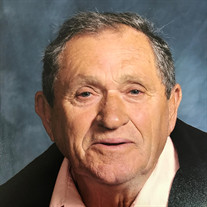 Michael Reginald Stasky, Jr. passed away Tuesday, October 24, 2017. Funeral Mass: 10 a.m. Friday at St. Ann Catholic Church. Visitation: 6 p.m. to 8 p.m. Thursday at Lucas and Blessing Funeral Home. Michael Reginald Stasky was born October 24, 1935 in Bremond, Texas to Mary and Michael Stasky. He was the fifth of their six children. He grew up in Bremond, met his childhood sweetheart, Frances and they married November 20, 1957. They had their first child, Michaline in 1958. In 1960, Michael took a job with North Texas Steel and moved to Fort Worth. Michael and Frances had their second child, Christopher in 1970. Michael also worked as a maintenance supervisor for ABM and managed Guys and Dolls in Fort Worth with Frances. In 1991, his first grandchild, Stephanie was born and became the apple of his eye. After retiring from ABM, he opened Stasky's Aluminum Can Recycling, which we all just know as "The Can Place". Even though it was his business, he used it as his own social club. Working there was often a family affair, and he could spend all day talking to customers. He always had an open ear and often a smart alec remark. He always knew the right thing to out a smile on your face and make your day better. Michael is preceded in death by his wife, Frances Stasky, his parents, Mary and Michael Stasky and brother Frank, Marion and Richard Stasky. Michael is survived by his daughter Michaline Elko, son Christopher Stasky, granddaughter Stephanie Elko, and sisters Cecila Holt and Doris Stasky. Michael was always a father and grandpa first and took great pride in his family. We will always carry him in our hearts and memories.

The family of Michael R. Stasky Jr. created this Life Tributes page to make it easy to share your memories.

Send flowers to the Stasky family.