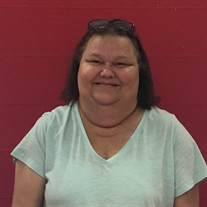 Michele Robin Kendall, 60, passed away March 27, 2021 at her home in Burleson. A memorial service will be held at 3:00pm, Friday, April 2, 2021 at Lucas & Blessing Funeral Home. Click here for a video stream: https://video.ibm.com/channel/23855904/video/xd17ov Michele was born January 17, 1961 in Anaheim, California to Joan Prenatt Campione, and she grew up in Orange County, California. She graduated from Anaheim High in California in 1979. After high school, she attended Harbor College for a year before working in the insurance industry in Wilmington, California. She went on to become a wife, mother, and artist. She married Mark Kendall in 1983 in Anaheim, California, and they were happily married for 38 years. Michele was preceded in death by her mother, Joan Campione and her son, Stevie Kendall. Michele is survived by her husband, Mark Kendall; daughter, Melissa Hutson and husband, Bradford and their daughter, Charlie Hutson. In lieu of flowers, Michele’s family wishes that you, instead, donate to the American Diabetes Association (www.diabetes.org) The family wishes to extend their gratitude to all of Michele’s family and friends that have been so helpful during this time.

Send flowers to the Kendall family.