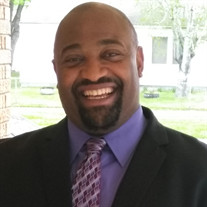 Oliver James Jackson, 42, beloved husband, soul-mate and best friend of Reeshema Ayanna (Brashear) Jackson for 6 years, passed away peacefully in his favorite place, home, surrounded by the ones he laughed with, lived for, and loved on October 10, 2019. Oliver was born in Chicago, the baby and fifth child of Reverend Lloyd E. and Sylvia A. Jackson. The family relocated to Decatur, Illinois, where Rev. Jackson founded and pastored Shiloh Missionary Baptist Church of which Oliver was a charter member. Blessed with a gift of music, Oliver was self-taught and played several instruments by ear. He used his musical gift to minister and encourage others. His life was a living example of Ephesians 4:32 "be kind and compassionate to one another, forgiving each other, just as in Christ, God forgave you." A self-proclaimed demon-assassin, Oliver lived an unashamed life before King Jesus. A teacher of the Gospel, Oliver had a gift of explaining the Word in a parable-like format. His faith in God was never-ceasing. In the face of the most difficult, tragic events, he trusted God. This trait allowed him a sense of realness and relatability that drew people to him. With an entrepreneurial spirit, Oliver worked as a car salesman and later transitioned to working independently. Oliver used his line of work to minister, encourage and pray for others. He was preceded in death by his father, Reverend Lloyed E. Jackson, Sr.; brothers, Lloyd E. Jackson Jr., Eric Von Jackson; sister, Mary Jackson and grandson, Braydon Taylor. Survivors: wife, Resheema; children, Jacory Taylor, Alexis Jackson, Emmanuel Collins, Summer Jackson, Channiel Collins, Kamdyn Jackson, One'i Jackson, Pariss Taylor; grandchildren, Isaac Taylor, Quincy Taylor, Aurora Taylor, Ashton Jackson; mother, Mrs. Sylvia Jackson; sister, Margaret Hodges (Rev. Alfonso Hodges) as well as nieces, nephews, other relatives, friends and loved ones.

Oliver James Jackson, 42, beloved husband, soul-mate and best friend of Reeshema Ayanna (Brashear) Jackson for 6 years, passed away peacefully in his favorite place, home, surrounded by the ones he laughed with, lived for, and loved on October... View Obituary & Service Information

The family of Oliver James Jackson created this Life Tributes page to make it easy to share your memories.

Send flowers to the Jackson family.