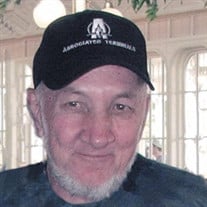 Paul Vernon Manuel was born September 7, 1933, to Thomas Russell Manuel and Dorothy Slawson Manuel, at the family home place in Switzerland County, Indiana. He graduated from Forest High School in Forest, Indiana, in 1952 and entered the Air Force in April 1953. He achieved the Rank of Sergeant as a radar specialist and was stationed to monitor the east coast during the last part of the Korean War. He then advanced to supply station manager in Long Island, N.Y., where he finished his tour of duty. Paul returned to Kokomo, Indiana to work at A.C. Delco. He met and fell in love with Janet Kay Thorn, they married and had five beautiful children, Julie Hastings, John Manuel, David Manuel, Rob Manuel, and Adam Manuel. In 1961, Paul purchased Manuel's Newsstand in Garrett, Indiana, and was the owner/proprietor until 1981. He then accepted a job at Stripe-A-Zone, a road painting company based in Grand Prairie, Texas. The family relocated to Everman, TX. In 1987, he left Stripe-A-Zone with two friends, Bill Swoape and Bill Moore, to form Precision Airfield Layout & Striping (PALS) to work specifically on military airfields. Paul has painted the markings on some of the biggest airfields in the country, including Cape Canaveral. He witnessed the launch of the first three space shuttles where he was painting at the time. He and his partners sold the business and retired in 2002. In his retirement, Paul enjoyed gatherings with his family, including "reunion" trips to various places with his siblings and their spouses. He enjoyed his children and grandchildren, attending sporting events, performances, and even races in the parking lot at Disney World. He was competitive and enjoyed playing cards and Aggravation with children, grands and great-grandchildren. He was preceded in death by his parents; sister, Irene LeCompte, and brother, Don Manuel. He is survived by his wife, Janet; children, Julie Hastings and husband, Carson, John Manuel and wife, Jackie, David Manuel and wife, Kari, Rob Manuel and wife, Samantha, and Adam Manuel and wife, Tanya; 15 grandchildren; 18 great-grandchildren; brothers, Russ Manuel and Larry Manuel; and sister, Evangeline Fowler. Due to the current shelter in place order, there will be a private funeral held on Saturday, April 11th at 3 p.m. at Lucas and Blessing Funeral Home. All prayers, thoughts and support for the family at that time will be greatly appreciated. If anyone desiring to send flowers, please consider donating to a favorite charity or Nazarene Christian Academy in Crowley at Fort Worth First Church of the Nazarene in his name.

The family of Paul Vernon Manuel created this Life Tributes page to make it easy to share your memories.

Send flowers to the Manuel family.