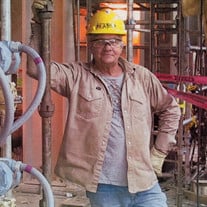 Richard Ernest Starks, 77, died Tuesday, April 2, 2019 at the Townhall Estates in Keene, TX after a battle with Parkinson’s and Dementia. Richard was born on May 21, 1941 at home in Martha, OK to Robert Ernest and Regina Cagle Starks. In his early years he was a prolific baseball pitcher that was courted by professional ball clubs while still in high school. He continued to pitch for several clubs after he left school, including a year with the UT Arlington team. As Richard started a family, he was eventually forced to give up pitching and concentrate on supporting them. He went on to make a successful career as a welder and mechanic. He worked on many large projects around the Metroplex and around the country, such as, DFW International Airport. One of his favorite stories to tell was the time he was welding 3 stories up on a steel building structure in Bakersfield, CA when an earthquake hit. He thought it was someone pranking him, so he held on tighter and kept welding. It wasn’t until he lifted his hood and saw the waves moving across the desert that he realized the truth. He often stated that “if he could be reincarnated as whatever he wanted, he would choose Welder”. He loved to travel and looked for any excuse to hit the road. Right up to the end, he was still planning trips and never gave up hope on completing them. Richard loved his family and he was willing to sacrifice everything for them, and often did. He enjoyed playing with the grandkids and great-grandkids and believed that helped keep him young. He would go a mile out of his way for a good prank. Richard leaves behind a legacy of love, laughter and hard work ethic to make this world a better place than the one into which he was born. That legacy is the accomplishment of which he was most proud. He was preceded in death by his parents, Robert Ernest and Regina Cagle Starks; sisters Nawana, Jerlene, Winona and Sandra; brothers Kenneth, Harry and Carol; grandson Patrick. He is survived by his son Mike (Paula) Starks of Cleburne, TX; daughter Shelley (Don) Starks of Atlanta, MO; son Tony (Elizabeth) Starks of Crowley, TX; son Donnie (Sheila) Starks of Keene, TX; son Casey (Deanna) Starks of Ft. Worth, TX; brother Tommy Starks of Burleson, TX; 15 grandchildren; 10 great-grandchildren; and many nieces, nephews and friends. The family wishes to extend their gratitude to St. Gabriel’s Hospice, Hope Church of Cleburne and Pastor Todd Barham, Lucas & Blessing Funeral Home and above all, Townhall Estates of Keene, TX for their loving care, compassion, respect and friendship during the last year of our father’s adventure.

Richard Ernest Starks, 77, died Tuesday, April 2, 2019 at the Townhall Estates in Keene, TX after a battle with Parkinson&#8217;s and Dementia. Richard was born on May 21, 1941 at home in Martha, OK to Robert Ernest and Regina Cagle Starks.... View Obituary & Service Information

The family of Richard Ernest Starks created this Life Tributes page to make it easy to share your memories.

Send flowers to the Starks family.