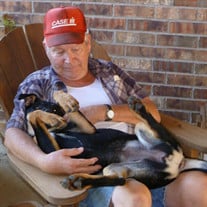 Robert Carroll Williams, 78, died peacefully on December 24, 2020 in Burleson, Texas. He was born on October 10, 1942 in Quanah, Texas to John Arthur and Stella Beatrice (Hull) Williams. Robert (or Bobby as he was known growing up), grew up in Medicine Mound, Texas. He received his GED in Texas in 1962. After high school he left Texas and found himself in Champaign, Illinois where he met Linda Stanley. They married in 1966 in Champaign, Illinois where they made their home till 1978, when they moved to Medicine Mound, Texas. In 2002, they moved to Burleson, Texas with their daughter, Bobby Sue (Williams) Nordblom. They were happily married for 54 years. Robert was preceded in death by his parents, Arthur and Stella Williams. Robert is survived by his spouse Linda of Burleson, Texas; his daughter, Bobby Sue (and Scott) Nordblom of Burleson, Texas; his son, John Arthur Williams (and Debi) of Lansford, Pennsylvania; his brother and sisters, John Williams, Barbara Rickert, and Audrey Clark; his grandchildren Cortney Nordblom, Roger Nordblom and Shannon Williams; his great-grandchildren Ryaen Finnegan, Kayla Finnegan, Aliyah Jenkins, Jesiah Jenkins; and his many nieces and nephews and other relatives. A memorial service will NOT be held at this time due to the COVID-19 virus. His family and friends are scattered throughout the country and their health and safety is important. A meet and greet may be planned later in the spring months. In lieu of flowers the family requests memorial donations be made out to Wrestle Against Autism Org. Mailing address is WAA c/o Jeff Sitler (chairman), 655 Sueden Dr, Beavercreek, OH 45430. We know how much Robert loved children and his dogs throughout his lifetime! This organization is known for assisting in the purchase of service dogs for autistic children in need. Scott and Bobby Sue have volunteered with this organization for 12 years. Robert had a quadruple bypass in 2001. The Cardiologist told Robert and the family to live life to the fullest. He had extensive heart damage and was given 5 years to live. Robert survived for another 19 years. Robert and Linda were able to retire to Burleson, Texas. Bob became involved in Boy Scouts of America in his later years with his grandson, Roger Nordblom. He served in various leadership/staffing roles for twelve years. Bob was able to tinker with his tractor, travel with his daughter, become a Boy Scout, and love on his dogs. He spent a lot of time in his shop doing wood projects. He made bird houses, bird feeders, squirrel feeders and large hummingbirds with moveable wings to hang from porches or trees. For the past 24 months his health declined rapidly due to a heart attack, stroke, and dementia. Robert lived to be the center of and life of the party. He will be missed by many family and friends. His friendliness, love, laughter, and cheesy smile will be remembered by all.

Robert Carroll Williams, 78, died peacefully on December 24, 2020 in Burleson, Texas. He was born on October 10, 1942 in Quanah, Texas to John Arthur and Stella Beatrice (Hull) Williams. Robert (or Bobby as he was known growing up), grew up... View Obituary & Service Information

The family of Robert Carroll Williams created this Life Tributes page to make it easy to share your memories.

Send flowers to the Williams family.