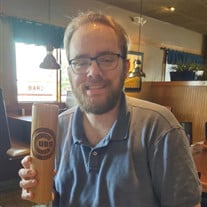 Taylor Lee Cole, 28, passed away Tuesday, January 11, 2022. Funeral services will be held at Lucas & Blessing Funeral Home, 518 SW Johnson Ave, Burleson, Texas on Monday, January 17 at 12:00 pm. Burial will follow at Burleson Memorial Cemetery. Click here for a livestream of the service: https://video.ibm.com/channel/2muQ8JfMPkJ Taylor was born July 19, 1993 in Ft. Worth, Texas to Stanton and Donna Cole. He grew up, in Burleson and graduated from Burleson High School in 2012. After high school, he attended the University of Texas at Arlington where he received a Bachelor of Arts degree in History. He was employed as a Registered Behavioral Technician Level II at Behavioral Innovations where he spent his days working with young autistic children. Among his varied interests, Taylor enjoyed reading, politics, baseball, video games. To say that he was a Star Wars aficionado would be an understatement. However, his greatest enjoyment came from owning and caring for many animals over the years, including his beloved “Oreo” and spending time with his family. Taylor was preceded in death by his grandmother, Pem Cole; grandfather, Frank Cruzen; and great-aunt, Martha Lana. Taylor is survived by his brother, Justin Cole; cousin and best friend, Chris Smith; his parents, Stanton and Donna Cole; precious Mamaw, Sally Cruzen; grandfather, Gene Cole; uncle, Travis Cruzen; aunt and uncle, Gwynne and Kelly Smith; and great-uncle, Paul Lana. In lieu of flowers, the family requests memorial donations be made to the Juvenile Diabetes Research Foundation at: https://www.jdrf.org or any animal rescue organization. The family wishes to extend their gratitude to the many people who have supported them during this time.

Click here for a livestream of the service: https://video.ibm.com/channel/2muQ8JfMPkJ

Send flowers to the Cole family.