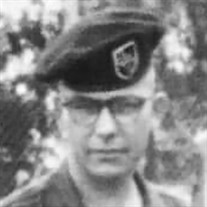 WILLIAM MENKINS, 78 William “Bill” Howard Menkins, 78, passed away on Saturday, April 1, 2017 at his home in Joshua, Texas after a long illness. He was born on September 4, 1938 to Harrison and Marcia (Middleton) Menkins in Syracuse, New York. Bill graduated from Onondaga High School in 1956 and enlisted in the U.S. Army shortly afterward. In the Army, he rose to the rank of First Sergeant, served two tours of duty in Vietnam, and retired after 27 years. In Vietnam, Bill was a member of the Special Forces (Green Beret), was wounded in combat, and was awarded the Purple Heart. Bill also received the Bronze Star, in addition to numerous other medals and awards throughout his career. Bill is survived by his wife of 30 years, Yvonne; his daughters, Deborah Menkins (Mark Orabuena) of Colorado Springs, Colorado, Lori (Christopher) Huber of Jamesport, New York, and Patty (Carlos) Casillas of Joshua, Texas; and his grandchildren, Dylan, Thomas, Matthew, Sydney and Cainan. He is also survived by his brother, Carl “Skip” Menkins, and his sisters, Lynda Boylan and Kathleen Thornton. Bill’s parents, Harrison and Marcia, and brother, Richard Menkins, preceded him in death. Bill loved cars, and enjoyed reading, and joking with family and friends. He will be laid to rest at Dallas-Fort Worth National Cemetery in Dallas, Texas.

The family of William Howard Menkins created this Life Tributes page to make it easy to share your memories.

Send flowers to the Menkins family.